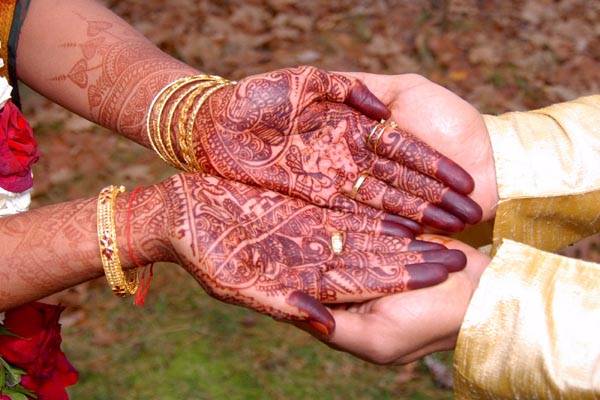 Welcome to arya samaj marriage, anyone can get any kind of marriage register by us. You can do your work successfully in short span of time with the help of our marriage centre.

The wedding is conducted according to Arya Marriage Validation Act XIX of 1937 and is solemnized according to Vedic rites. In these weddings, the pooja is not performed to any specific deity because the Samaj doesn't believe in idol worship. Fire and the other elements are the only witnesses to the ceremony.Simplicity is the hallmark of Arya Samaj weddings. The rituals performed are the ones prescribed by the Vedas and the mantras are translated into the Tamil / Hindi / English so that the couple know what the meaning of their marriage vows.

Arya Samaj Marriages held, are very simple in affair and the Vedas are translated into Hindi/English, so that everybody can understand it. Couples, other than hindu religion has to first get converted into Hinduism, by a process called (Shuddhi) meaning complete purification which is done by their consent and then, they can get married according to Arya Samaj Teachings.

It is performed by Aryas, who are considered to be people, working for the betterment of society on the basis of truth. Any couple from Hindu religion (Slkh, Jain, and Buddhist) can get married according to Arya Samaj foundation. It is based on the concept that the amount of money spent on marriages, can be used for other better purpose for the upliftment of the society,so in this type of Arya Samaj Marriage, The marriage certificate awarded by Arya Samaj is completely valid and getting which you become legal husband and wife. After getting Marriage Certificate, neither one can make any harm to you legally nor this certificate be challenged in any court. Furthermore, on the basis of this certificate you can register your marriage in Marriage Registrar Office.

Not standing with any provision of Hindu Law, usage or custom to the contrary no marriage contracted whether before or after the commencement of this Act between two persons being at the time of the marriage Arya Samajists shall be invalid or shall be deemed ever to have been invalid by reason only of the fact that the parties at any belonged to different castes or different sub –castes of Hindu or both of the parties at any time he marriage belonged to a religion other than Hinduism.

Documents for All Marriage